A Muslim high school student has been left with ‘psychological and mental trauma’ after being in a class where a caricature of the Prophet Muhammad was displayed.

A teacher at Mount Ridley College in Craigieburn – 25km north of Melbourne’s CBD – showed the cartoon at a Year 11 media lesson on October 14.

The student’s father immediately complained to the school and has since apologised.

“She was forced to watch a clear and blasphemous cartoon developed somewhere in Europe against our holy prophet Muhammad,” her father said.

Depiction of the prophet Muhammad is forbidden in most, but not all, interpretations of Islam. 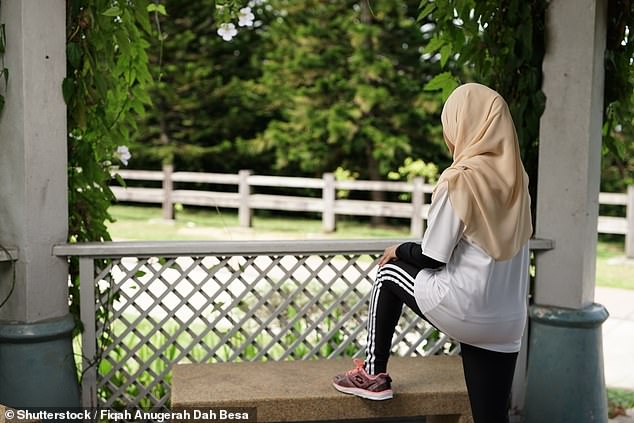 A Muslim student has been left with ‘psychological and mental trauma’ after an offensive cartoon of the Prophet Muhammad was shown in class. In the photo is an image of a young woman wearing a hijab

The cartoon, which was not in the official curriculum of Victorian government schools, was a front page of the French satirical magazine Charlie Hebdo.

That image, and others in the publication, sparked a mass shooting at the magazine’s Paris office on January 7, 2015 that left 12 dead and 11 others injured.

According to the Islamic Council of Victoria (ICV), the teacher warned at the start of class that potentially ‘confrontational’ content would be shown and advised that students were free to leave if they wished.

“The Muslim student in question raised objections to the material presented, but the teacher continued,” the ICV said in a statement.

The girl’s father wrote on social media that ‘unfortunately the teacher did not care and continued to play the video, forcing my child to watch that content.’

“This has painfully burdened the feelings of my child and my family and put us through a painful psychological and mental trauma,” he added.

The student’s parents raised their concerns with the school, ICV, the Victorian Department of Education and Training (DET) and the state government.

A DET spokesperson told Daily Mail Australia the department was looking into the incident.

“Once the review is complete and the department has consulted with community groups, a decision will be made on whether schools should be given any additional advice in relation to similar sensitive matters,” the spokesman said.

“Full support is being offered to every student who has been affected.”

The father met with the school principal and others to discuss the complaint.

“A representative from ICV’s Islamophobia Support Service attended this meeting as well as a DET representative, a lawyer acting as a support person for the father and other family supporters,” ICV said.

The school contacted the family and is offering support to their daughter.

The family wants the teacher suspended, a public apology from the school and the opportunity to speak to the school community about Islam and the Prophet Muhammad. 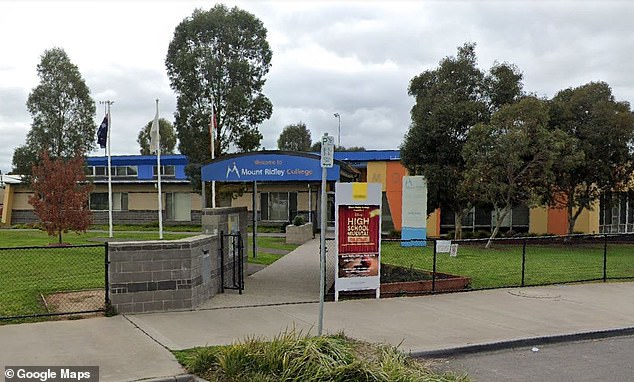 A teacher at Mount Ridley College (pictured) reportedly played an ‘explicit and blasphemous’ cartoon in a Year 11 media lesson on Friday 14 October.

The teenager’s father said that the family is looking for ‘an explanation as to why this kind of event happened.

“We also want confirmation that such events should not happen in any institution that offends our sentiments.

The ICV said it ‘understands that many in the community are extremely upset about what they have heard and want to express their anger and disapproval’.

“ICV is working closely with the family in question and others involved and asks that the community give ICV and others working to address this matter time to complete their investigations and take appropriate action.”

What happened at the Charlie Hebdo magazine office in Paris in 2015?

Around 11:30 a.m. on January 7, 2015, two terrorists and French Muslim brothers, Saïd and Chérif Kouachi, forced their way into the Paris office of the French satirical magazine Charlie Hebdo.

They killed 12 people and injured 11 others, using rifles and other weapons.

They said they belonged to the Islamic terrorist group al-Qaeda in the Arabian Peninsula, which claimed responsibility for the attack.

Several related attacks followed in the region from January 7-9, including a siege at a kosher supermarket in which a terrorist killed four Jewish people.

Hatred of Charlie Hebdo’s cartoons, which poked fun at Islamist leaders and featured depictions of Muhammad, was the main motive for the massacre.

No comments to show.